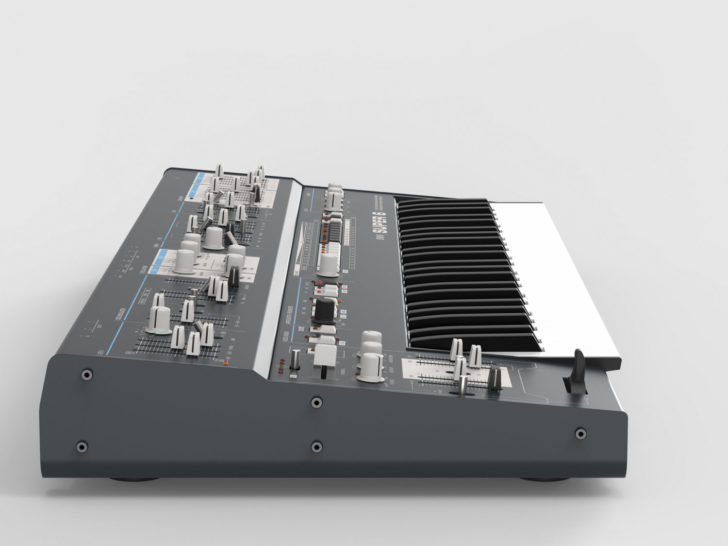 UDO let us know that their Super 6 Binaural Synthesizer is now officially available.

The Super 6 is described as ‘a new take on the traditional analog synthesizer. Here’s what they have to say about it:

“State-of-the-art FPGA digital hardware oscillators are coupled with analog filters and amplifiers, while its unique super-wavetable core can be shaped and manipulated with the binaural analog signal path and flexible modulation.

Perfectly paired with a fastidious focus on build quality and mechanical design duly benefitting from the ‘Midas touch’ of the one and only Axel Hartmann, responsible for shaping the look and feel of many modern musical instrument classics from the likes of Arturia, Moog, and, of course, Waldorf (where he started out as an in-house designer), the SUPER 6 both sounds and feels fantastic!”

One of the unique features of the Super 6 is its Binaural mode. In this mode, the synth groups its 12 voices into six ‘Super Voices’ pairs (hence the keyboard’s name). Both the left and right channels – and your ears, effectively – are assigned a complete synthesizer voice. 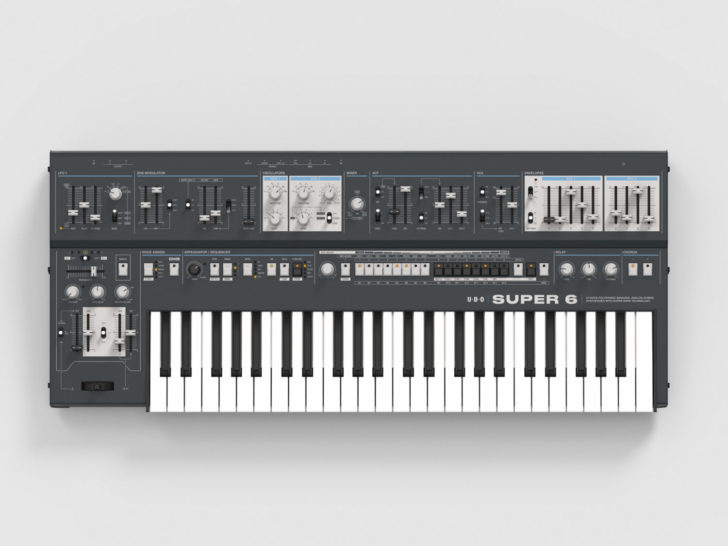 The parameters of the Left and Right channels of each voice can also be controlled indepenently, allowing for a much wider range of synthesis possibilities than with synths that essentially take a monophonic voice and add chorus or other effects on the end. According to UDO, this allows users “to create stunning stereo images. Indeed, the effect on the sound ranges from subtle to extreme stereo movement and an enhanced sense of spatial positioning relative to conventional monaural signal chains panned at their output.”

The Super 6 synth voice starts with DDS (Direct Digital Synthesis) signal generation is employed by both oscillator cores. These are capable of producing classic analog waveforms like sine, triangle, sawtooth, and square, but DDS1 — the first oscillator — also features a selection of 16 waveforms, which are also user-replaceable.

An analog voice architecture is applied elsewhere, with the Super 6’s main VCF (Voltage-Controlled Filter) being an analog 4-pole, 24 dB per octave, resonant low- pass affair using a classic — SSI2144 — polysynth filter design from Sound Semiconductor. It is preceded in the signal chain by an analog voltage-controlled HPF (High-Pass Filter) that can either be OFF, FIX (fixed), or also TRK (track) the low-pass filter cut-off FREQ (frequency) for band-pass operation. The patch also features an analog VCA.

The synth’s Envelopes can be routed to multiple destinations, including the DSS MODULATOR, the VCF, and the VCA. Each envelope features four ADSR (Attack, Decay, Sustain, and Release) stages, while ENV 1 also features a so-called H (Hold) stage, allowing users to delay when the attack stage starts after they have pressed a key, and LOOP mode.

The Super 6 also offers an arpeggiator, sequencer, with features like random, step, slide, accent, rest and customizable length. Users can store up to 64 sequences.

Finally, two 24-bit effects are available, a stereo DELAY that can be modulated and synced to the ARPEGGIATOR/SEQUENCER or to an external clock, and a classic-style dual-mode stereo CHORUS, routed in series with the CHORUS coming first and the DELAY being last in the audio signal path.

“My mission with the Super 6 has been to harmonize what I love about archetypal electronic instrument design with modern, novel synthesis technologies that excel at generating spatially dynamic results,” notes creator George Hearn. “The architecture leverages the vibrancy of a true-stereo analog signal path, driving it with extremely high sample rate, spectrally versatile digital audio, and presents you with straightforward, expressive controls of superior mechanical build quality. I would love to see this instrument with the wear and tear of many years of use. Experiment, play, learn, and, hopefully, love it like we do!”

The Super 6 is available in black or blue with a street price of about $2,800 USD.