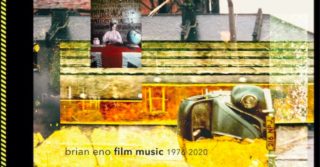 The 17-track retrospective, scheduled to be released on UMC on November 13th, is the first comprehensive collection of Eno’s soundtrack music.

The album features tracks from movies like Trainspotting, David Lynch’s Dune and Michelangelo Antonioni’s Beyond The Clouds, as well as “Final Sunset,” a track initially featured in Derek Jarman’s 1976 film Sebastiane, and subsequently included on Eno’s acclaimed 1978 album Music For Films.