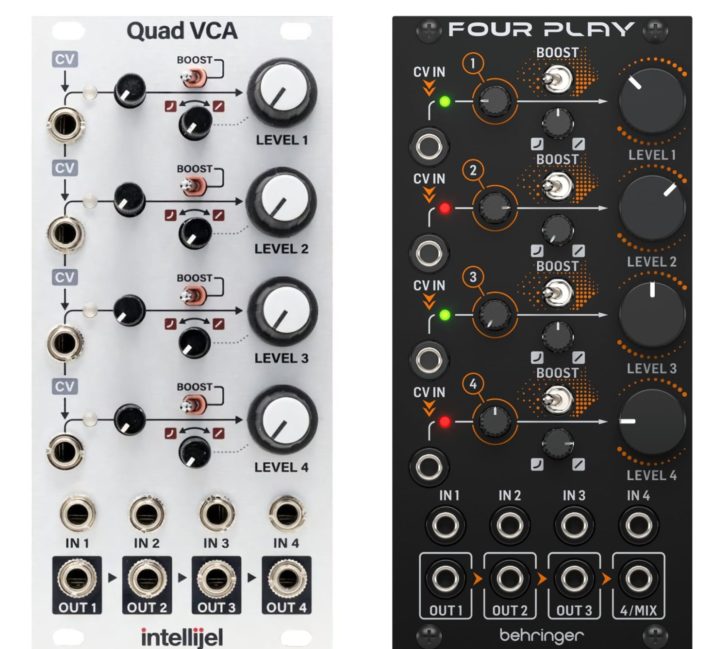 As Synth Anatomy’s Tom Wies points out, it looks like Behringer skimped on Four Play, because the module appears to be a direct knockoff of the Intellijel Quad VCA. Comparing the two modules, pictured above, the Four Play copies the features, controls, layout and panel graphics of the Intellijel module.

Behringer says that the best part of Four Play is its price – the module lists for $99 vs $189 for the original Intellijel design.

Here’s what Behringer has to say about the new module:

The curve controls allow you to setup the ideal CV response curve from fully exponential to linear, or any combination of the two.

The level controls set the VCA gain and allow manual control of the signal output level, both when used as independent VCA’s or when used as a mixer. The VCA’s are DC coupled so can process both audio signals and CV signals.

The FOUR PLAY gives you comprehensive connectivity, 4 CV inputs for control or modulation of the VCA’s which are cascaded allowing all 4 VCA’s to be controlled by a single CV input if required. 4 signal input jacks with excellent headroom and the 4 VCA outputs are cascaded so that if only the 4/MIX output jack is used, the module becomes a 4-input voltage-controlled mixer, other combinations are easily selected according to which output jacks are inserted, such as a dual 2 input mixers for ultimate flexibility.”

The Behringer Four Play is coming soon to dealers, priced at $99 USD.