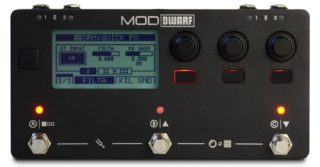 MOD Devices has announced that the MOD Dwarf –  a new dual-channel multi-effects pedal – is now available.

The MOD Dwarf lets you used 400+ free and commercial plugins, which can be patched using a browser-based visual interface that lets you split, join and feedback signals in a modular fashion.

Your patches can be saved, uploaded to the cloud, and used anytime, without the necessity of a computer.

The MOD Dwarf was originally introduced and funded via a successful Kickstarter project.

The MOD Dwarf is available globally, through international distribution and retail partners as well as at the MOD Devices Webshop, for 499.00 Euro inside EU or $499 USD internationally.