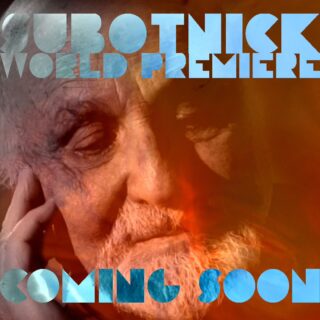 “We could not be more proud of the film, and can’t wait to share it with all of you,” they note. “We also take great pride in the fact that Mort has given his full approval of the finished film. We are truly humbled by that!”

The world-premiere for the film is planned for early-November. Details are to come.

Through a series of candid interviews and illuminating conversations with key figures from his past and present, Subotnick provides an overview of this fascinating composer’s rich life and uncompromising career.

Over 5 years in the making, Subotnick is a first-hand account, and an artistic portrait, of this seminal composer, whose approach to art, and outlook on life, reveal a unique thinker with a fiercely individualist streak.

The film narrative moves along two parallel lines; exploring a year in his life as he creates and shapes the multi-media chamber opera “Crowds and Power,” while simultaneously exploring his past — going back in time to his days as a child prodigy on the clarinet, his disastrous stint in the army during the Korean War, founding the San Francisco Tape Music Center, and culminating in his breakthrough recording of b, the world’s first electronic music composition specifically created for the record medium.

Featuring several live performances from around the globe, captured in glorious surround sound, and augmented with innovative liquid-light psychedelic effects, Subotnick is a multimedia experience that highlights and celebrates one of the world’s most influential living composers.

The company also shared an update on their long-awaited Electronic Voyager, a documentary about Bob Moog.

They say that they have a rough cut of the film that they are proud of and that has the approval from Bob Moog Foundation executive director, Michelle Moog-Koussa.

“We feel strongly that Electronic Voyager will be an eye-opening, heart-breaking – and heart-warming – insight into the man behind the myth,” notes Producer Jason Amm.

Waveshaper says that licensing costs are a hurdle to be addressed before they can do a final release, but that they are confident enough in their rough cut to submit the film to “several major 2023 doc/film festivals.”