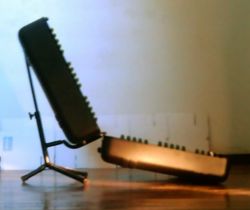 Both Plan B and Buchla will be at the Noisebug booth 6108 which is on the main hall this year in the vicinity of Moog and Motu.

Sometime this week I will be posting further details on what we’ll be showing on the Plan B Analog Blog (go to www.ear-group.net to sign up.

On the module end will be the models 21C Mini Milton VC Sequencer, the Model 32 Vector Plotter and the M30 and 30A – two components of the mighty Triple Digital VCO Subsystem.

There are four other products being introduced which are part of the big move into cases and systems.: The Ringer, a single row rack frame offering a low-cost solution to a previously expensive expansion requirement, and the Model Zero, which is the same three row Zero Halibuton case used by NIN with some significant improvements, including power saving modes, top/bottom strip modules and the option of expanding to six rows. A photo has been posted in the PB Analog Blog.

The Performance System, which has it’s own case not unlike the Doepfer portable although two rows of 102 HP and eight inches deep is our fist venture into the systems arena and will also be on display and operational.

To support the Ringer, the Zero and the PS we’re introducing an external power system which utilizes two high-grade second party switching supplies as it’s engine. The supplies are audio grade and protected to the point that key’d power connectors on the bus will not be required…the PSU will shut itself off instantly if a module is installed incorrectly.

Along with Noisebug’s, Plan B goods will be on display at a couple of other booths as well – keep a sharp eye out!

Again, when my schedule allows I will be posting more details on all this, including photos to the PBAB. Please grant me patience with this and in getting back with anyone who may need to contact me as I’m deep into Namm hell at present and time away to post is minimal.

Thanks again and I look forward to seeing you all at the show!

via the Plan B Yahoo group, via bleepology