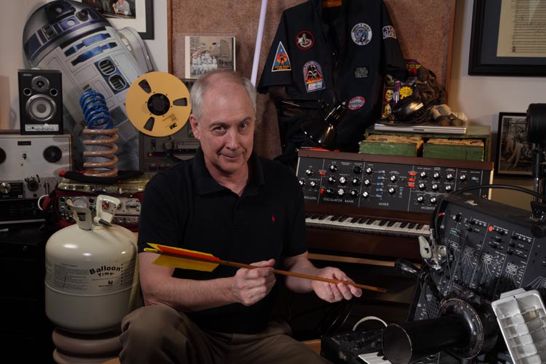 Burtt reveals some of the stories behind the sound design for J.J. Abram’s Star Trek movie:

EGM: We’ve talked about the library of sounds you created for J.J. Abrams’ upcoming Star Trek. Can you talk about how you re-created some of the iconic effects for the movie? Let’s start with the hand phaser.

BB: In the original series, the steady blast of the phaser was derived from the hovering sound of the Martian war machines made for the 1953 version of Paramount’s War of the Worlds. The original was made with tape feedback of an electric guitar and a harp. You can achieve a very similar sound on a Moog synthesizer by modulating a steady sine wave with pink noise. The phasers in the new movie are more like the blasters in Star Wars in the sense that they are flying bolts or tracer bullets, rather than a steady beam. The steady sound just wasn’t the right way to go because the visuals are so different, so I made something that recalls it, but features a Doppler effect and is shorter and sharper. My sounds were added to those that had already been supplied by Mark P. Stoeckinger and Alan Rankin.

EGM: And the Photon Torpedoes?

BB: That sound can be traced back to the Paramount Pictures library; it even turns up in some 1940s Bob Hope comedies, so no one can say for sure how it was created. My ears tell me that it was an impact on a spring, maybe picked up with a contact mic. I reproduced mine using a very long spring, capping it and putting a contact mic on it, and combining that with a cannon blast. I also created a derivative of that for the phasers. It recalled the style and feeling of the original, while translating well in to the very different visuals of the movie.

EGM: What about the Enterprise Warp Drive?

BB: The original warp drive sound was a very musical tone that ramped up and down in pitch, with all kinds of hum and distortion, and it was undoubtedly produced with a test oscillator going through a plate reverb chamber. I wanted to go back to that musical idea, and get something with an emotional feel to it, so I reproduced that sound in exactly the same way in analogue fashion, using a 1960s-era test oscillator that was once in the physics department at my old school, Allegheny College. I went back there and actually found that oscillator in a basement, and brought it back with me to use on the movie.

EGM: What about the transporter?

BB: There are several different elements to it in the original version, including, once again, a rising oscillator tone as well as a “singing” ethereal tone. The transporter in the movie looks and functions a little bit differently than the one in the series, but I wanted to recreate the feeling of the original’s shimmering, ringing tone. So I came up with something that was reasonably close, using bar chimes and a lot of reverb.

See the full interview at Editorsguild.com.