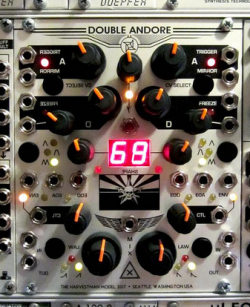 The Double Andore is the newest module available from The Harvestman.

Described as a “dual attack-decay envelope generator and 2-channel VCA with digital curve shaping and VCA law selection”, there is nothing simple about this module.

The front panel is the Harvestman’s “busiest” yet, offering plenty of controls to tweak and fun to be had.

The Harvestman Double Andore module is priced at $485.

dual a-d envelope generator and 2-channel vca with digital curve shaping and vca law selection. double andore is to function as your synthesizer’s keystone and its meridian.

double andore features a symmetrical control layout with two identical sides. the top section of each half is an a-d envelope generator. a trigger input is provided, along with “freeze” and “mirror” gate inputs. the former holds the envelope at its current position, and the latter inverts the position of the envelope within its voltage range. the envelope signal passes through a digital curve shaper whose selected curve is numerically displayed. normally, each half of the module has its shape selection apply to both the attack and delay phases of its envelope, but you can enable an alternate mode where the left and right shape select controls instead select different curves for attack and decay. two banks of envelopes are available.

the envelopes can behave in three ways. ad mode runs through its phase upon receipt of a trigger or gate. ahd mode holds the envelope at its maximum value if there is still a gate present at the end of the attack phase. lfo mode freely cycles back and forth between attack and decay phases with no trigger necessary. all three modes will retrigger to the beginning of the attack phase if another trigger event is applied. each envelope features one cv input which can be assigned to any of the following parameters: attack time, decay time, and curve shape. negative voltages are valid input and will correctly add or subtract from the manual voltage of the assigned parameter(s). each envelope has three outputs with led indicators: the 0-8v envelope voltage, and trigger signals that fire at the end of both attack and decay phases.

the lower part of each half is a dc-coupled vca. the envelope output is normalled to the vca control input, and can be overridden by patching into the ctl jack. the gain law of each vca is switchable between linear and exponential. the exponential mode can distort if excess audio or control input is given, and its sensitivity can be adjusted by an internal trimmer. by holding down the law selection button for two seconds, you can enable cross-modulation from the opposite vca channel.

the center section of the module features mixers for both envelopes and vcas. the envelope mixer is a maximum circuit that outputs only the highest voltage from the two envelopes, with a balance control to adjust the strength of each input. the vca mixer simply mixes the output of both amplifiers with no additional controls necessary.