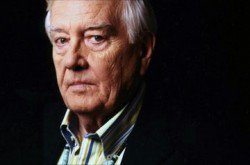 American composer Robert Ashley – who reinvented opera with electronics and avant garde techniques – died yesterday at the age of 83.

Ashley (March 28, 1930 – March 3, 2014) was known for radically rethinking the concept of opera – reimagining it for TV and for recordings. and incorporating electronic instruments and electronic manipulation of speech.

In one work, Automatic Writing, Ashley recorded his involuntary speech (from Tourette’s Syndrome) and used it as one of the characters in his opera. The other three ‘characters’ were:

Here’s a 2011 performance of his That Morning Thing, performed by the Once Group:

Composer & critic Kyle Gann, who recently published a biography of Robert Ashley, had this to say on Ashley’s death:

“Bob was one of the most amazing composers of the 20th century, and the greatest genius of 20th-century opera.

“I don’t know how long it’s going to take the world to recognize that. And it hardly matters. He knew it. That the world was too stupid to keep up was not his problem.”

3 thoughts on “Robert Ashley, “The Greatest Genius Of 20th Century Opera”, Dead At 83”