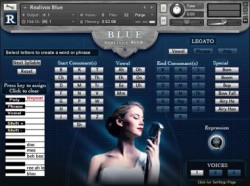 RealiTone has released Realivox Blue – a new vocal synthesizer that can translate words you type into vocals.

Realivox Blue is based on 12,000 samples, carefully edited to allow individual sounds to be composited into words and phrases.

Here’s a collection of audio demos:

Here’s what RealiTone has to say about the new virtual vocalist:

Six vowels and 23 consonants give you the tools to create your own words and phrases. But we went deeper than just sampling a bunch of vowels and consonants. Way deeper. Consider these elements:

An “s” singing into an “ee” sounds different from an “s” singing into an “oo.” (Try it yourself. Listen to how your own “s” will sound different, depending on the vowel.) So each consonant was recorded separately going in and out of each vowel. There are two and a half octaves of “k” samples (32 samples) that go into “ah.” Another 32 of “k” into “eh.” And so on. For each consonant, that’s six sets for each vowel.

When we recorded the ending consonants (completely separate samples), we noticed that it doesn’t sound quite right if you just slap an end consonant sample onto the end of a vowel sample. A singer’s mouth closes differently, depending on which consonant they’re going to. So we sampled not only 192 ending “t” consonants (6 vowels times 32 samples per vowel), but we also recorded the closing vowel sounds leading into each consonant. For ah. And for eh. And ee. And oh. And oo. And uh.

So when you play “Peace,” you’ll be triggering four samples altogether. First is the “p” sample that specifically with “e.” Then you won’t hear just any “ee,” but you’ll actually get the “ee” that comes after “p.” (Your ear would know if we tried to cheat and use a regular “ee” instead.) Then you’ll hear a few milliseconds of a closing “ee” that would lead into “s.” And then finally, the “s”. A closing “s” that specifically goes with an “ee” vowel..

This is why Realivox Blue is 12,000 samples. No other vocal library that we know of has gone this deep in the quest for realistic vocal performances.

TRUE SAMPLED LEGATO:
We sampled legato intervals for all six vowels, as well as for “mm.” (We find humming to be a particularly useful articulation.) Not just the six/seven vowels, but also the special transitions betweem say, oo to ee. When you sing from oo, to ee, there will be a “w” in the transition. (Try it yourself and you’ll hear what I mean.) So we have “oowee” legato samples. And “oowah.” And “ooweh.” And “eeyoh.” And on and on.

Then we spent months editing and balancing to get the legato as smooth as we could make it.

Check out the audio demos and let us know what you think!

21 thoughts on “Realivox Blue Lets You Turn Text Into Vocals”