The Smithsonian has announced the donation of significant artifacts from the family of award-winning hip-hop artist and producer, James “J Dilla” Yancey (February 7, 1974 – February 10, 2006).

The J Dilla collection, donated by J Dilla’s mother, Maureen Yancey, includes his custom-made Minimoog Voyager synthesizer and his Akai MPC 3000 Limited Edition, one of only 2,000 units released in 2000 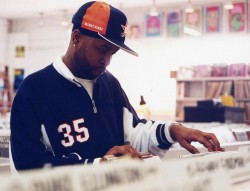 The J Dilla collection will be part of the museum’s growing arts and entertainment collection, designed to explore how popular music helped shape the nation’s history and culture politically and socially.

J Dilla recorded more than 15 albums, and produced for a variety of artists, including A Tribe Called Quest, The Roots, Common, Janet Jackson, De La Soul, The Pharcyde and Busta Rhymes.

The J Dilla collection will be part of the The Smithsonian’s National Museum of African American History and Culture, established by an Act of Congress in 2003. The museum is under construction on the National Mall in Washington, D.C.