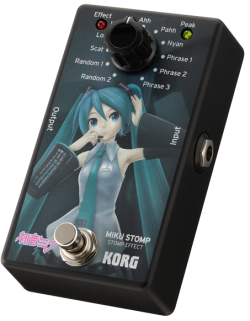 The vocal synthesis technology at the heart of the sound is eVocaloid, a vocalzing effect based on Yamaha’s next-generation NSX-1 sound engine.

According to Korg, using a guitar to control Hatsune Miku’s vocals has a different character than when using step-recording or a keyboard.

Here’s a quick video demo of Miku in action:

Official pricing and availability details for Miku Stomp are to be announced. See the Korg site for details.