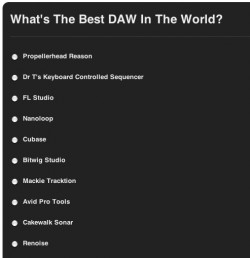 Since our last DAW poll, the percent of our readers that use iOS and Android mobile devices has grown to over 33%. But, while mobile apps are popular, desktop DAWs are still the first choice for over 90% of electronic musicians.

Leave a comment below, too, and let us know the reasons behind your vote!