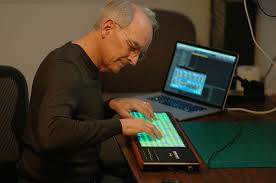 Instrument designer Roger Linn and his latest creation, the LinnStrument, are featured in a great article over at Wired.

It’s rare to see an article in a mainstream publication that accurately covers the more technical side of electronic music technology. In this case, author Rene Chun not only offers a good summary of the state of alternative MIDI controllers, but also includes some great perspective from Linn and Keith McMillen.

Linn argues that most of today’s MIDI controllers are a type of ‘horseless carriage’ thinking – being so tied to the technology of the past that it’s hard to imagine the natural forms for new technologies:

“Fifty years from now, the 1970s to 2015 will be regarded as a strange period in history when people played musical sounds with secretarial input devices: on-off buttons, switches, sliders, and knobs.

Controlling numbers by pressing keys. That’s a horrible interface. A violin, sax, cello or clarinet has more range than a MIDI keyboard. Because it relies on basic switch technology, it lacks a compelling instrumental voice. PMCs (polyphonic multi-dimensional controllers) are the future.”

Here’s a video demo of the LinnStrument’s 3D expressive capabilities:

He also argues that today’s controllers are shaping the way current music is conceived and performed:

“Is there any famous virtuoso player of electronic instruments you can name? The closest thing we have are EDM DJs, who don’t actually play any notes.

The concept of an instrumental solo has virtually disappeared from today’s electronically generated pop music. I’d argue this is due to the lack of any compelling instrumental performances.”

Is this type of coverage a sign that alternative MIDI controllers are reaching a tipping point? Check out the full article at Wired and let us know what you think!