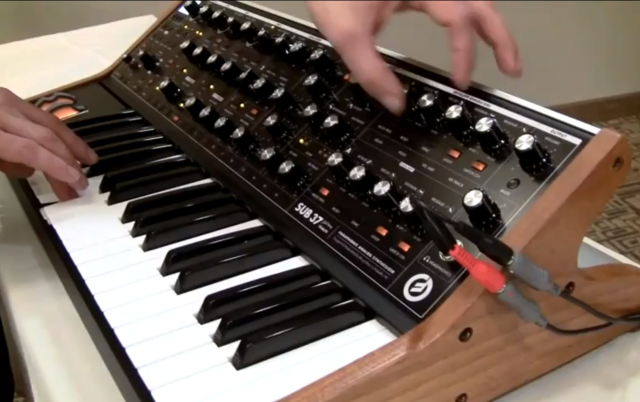 The update adds a variety of step sequencing features, including step edit mode, skips, ratcheting and per-step mod sequencing; control voltage mapping that lets you control just about anything via the external CV inputs; and the option to add randomness to the oscillator tuning.

Here’s an unofficial demo of the new features in the firmware, via John Keston of AudioCookbook.org:

This update is significant because the bulk of the updates are new features,” notes Keston.  “In this video, I demonstrate step edit mode and quick mapping of modulation destinations.”

Here’s what Keston has to say about his second demo video:

I have had some time to experiment further with the new Moog Sub 37 firmware. In this demo I show seven new features within the sequencer and arpeggiator sections of the instrument.

First I review how to turn steps on and off while in step edit mode. Secondly I show how to set the start and end positions of the sequence while it continues to run. Thirdly I show how to create ties between two or more notes and then disable them on the fly. Fourth I demonstrate how to turn on/off step ratcheting and how to modify the number of ratchets. For the fifth feature I adjust the swing amount. The sixth feature is modulation sequencing that I applied to the filter envelope amount. Finally for the seventh feature I demonstrate how to shift the sequence back or ahead of the first step.

Here’s an overview of the new firmware update from the 2015 NAMM Show, by Moog’s Amos Gaynes:

The Moog Sub 37 firmware update is a free download via the Moog site.

If you’ve tried it out, let us know what you think of the update!