IK Multimedia has announced that its iRig Keys controllers are now cross-platform compatible.

Both the iRig Keys and mobile full-size keyboard iRig Keys PRO controllers will now ship with a Micro-USB to OTG cable for Android devices and Lightning and USB cables. 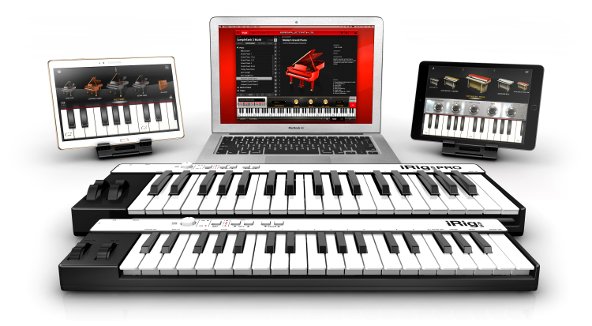 As a result, iRig Keys and iRig Keys PRO should now work with Lightning-compatible iOS devices and Android devices, as well as Mac/PC, right out of the box.

Both deliver a full 3 octave range (plus one note) and offer: mod and pitch bend wheels, a Volume/Data knob, a SET button for storage and recall of up to 4 different custom setups, input for a sustain or expression pedal and more.

iRig Keys and iRig Keys PRO are available now from music and electronics retailers worldwide, and from the IK online store, for $/€129.99 and $/€149.99 respectively (excluding taxes). See the iRig Keys site for details.