The Continuum Fingerboard is considered by many to be one of the most powerful electronic music instruments ever created. The instrument provides continuous control of three dimensions of musical expression via a touch and pressure-sensitive playing surface.

Each finger can control three dimensions of an individual note simultaneously — pitch, volume, and timbre, for example. Additionally, two expression pedals can be attached, to allow even more expressive control.

While the Continuum has a deep synth engine built-in, the Evaton µCVC is designed to let you use the instrument’s multidimensional control with modular synth patches. 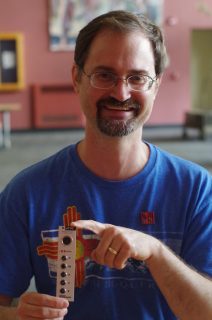 The µCVC is an Euro adaptation of Haken Audio’s CVC, or Continuum Voltage Convertor, which allows the performer to control outboard analog gear with the Continuum surface. While the Haken Audio CVC is a self-contained desktop device with 1/4″ jacks, and it tracks up to four fingers on the Continuum Fingerboard surface, the µCVC is designed specifically for integrating with Euro systems.

Each µCVC tracks the Continuum’s W, X, Y, and Z parameters for a single finger. For duophonic playing, a second µCVC can be daisy-chained via a behind-the-front-panel ribbon cable. A single cable from the Continuum to the “master” µCVC carries all the data for both channels. In this configuration, two fingers on the Continuum Fingerboard surface can control up to 8 control voltages and 2 gates on a Eurorack synth, for a wealth of expressive possibilities in a live performance.

Here’s an intro by Hoffman, from ContinuuCon:

The Evaton Technologies µCVC is expected to be available this summer, priced around $225-250. A limited number of hand-built ‘early adopter’ modules are available now, via the Evaton site.