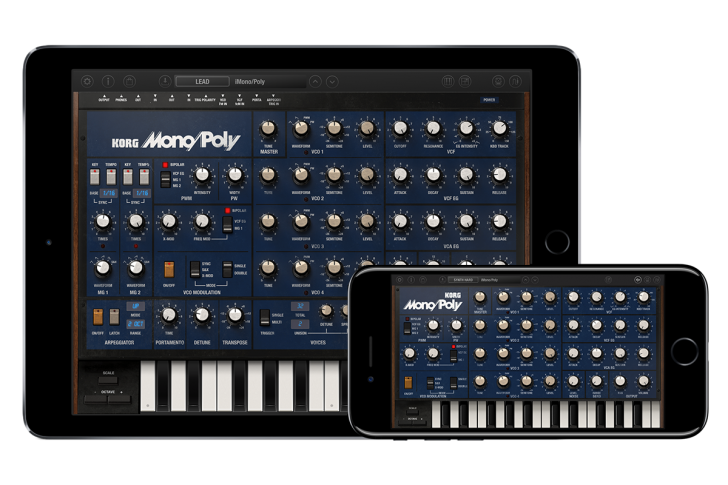 Korg has announced the reintroduction of iMono/Poly, an iOS version of the classic monophonic synthesizer.

Korg introduced the Mono/Poly, a “fat-sounding” four-VCO monophonic synthesizer, following the release of their six-voice Polysix synth in 1981. Manufactured from 1981 to 1984, Mono/Poly’s “most signature characteristic” was the Synchro and Cross Modulation functions that could run dual, or four-way cascaded modulation routings for creating “revolutionary and aggressive tonal effects”

The reintroduced iMono/Poly app reproduces all of the features of the original Mono/Poly: four VCOs and an array of modulation options for sound design, and two multi-effects units and eight virtual patches have been added.

The iMono/Poly faithfully reproduces the “thick” sounds for which the Mono/Poly was known, by using Korg’s proprietary CMT (Component Modeling Technology), which models the electronic components and circuits of the original hardware.

Eight virtual patches expand the Mono/Poly’s distinctive sound-design potential. A total of 159 modulation sources such as MG, EG, velocity, and keyboard tracking can be used to modulate 35 destinations such as oscillator pitch, level, filter, MG, and EG. Two multi-effect units are also provided, allowing you to create complex and broad-ranging sounds with complete freedom. In addition, iMono/Poly has 128 preset sounds built into the app, along with a template function with a wide array of basic sounds. 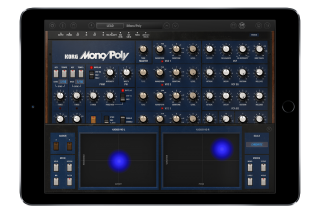 iMono/Poly is designed with an easy-to-navigate screen structure that provides quick access; with a single tap, the user can rotate between the main synth & key assign screen and the virtual patch & effect screen. Kaoss Pad functionality has also been added (pictured), providing an interface that takes advantage of the ease and intuitiveness of iOS. iMono/Poly can be used in conjunction with Korg Gadget, the music production DAW app.

Finally, the user can connect a MIDI controller and use iMono/Poly as an external sound module for performance. Most MIDI keyboards can be used to play iMono/Poly, including the Bluetooth MIDI compatible nanoKEY Studio and microKEY Air that allow wireless play

Pricing and Availability. Korg iMono/Poly is available now for download via the Apple App Store for $19.99. For more information on this app and others, visit the Korg website.