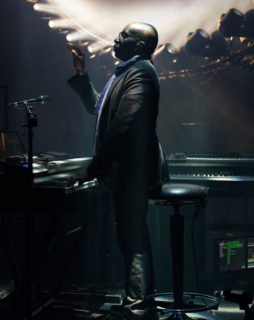 Phillinganes will be performing at the piano, relating stories from his long career, and sharing his insights about Bob Moog and his work.

The event is part of the non-profit Foundation’s Moogmentum In Place series of fundraising livestream events. The series celebrates Bob Moog’s birthday and the one year anniversary of the Moogseum, both of which fall on May 23rd. During the livestream, attendees will have the opportunity to donate to the Foundation to help support the Foundation’s work, including the reopening of the Moogseum.

“It’s an incredible honor to have Greg appear in support of our work, and the legacy we represent,” notes Michelle Moog-Koussa, Executive Director of the Bob Moog Foundation. “His talents and his vast accomplishments are extraordinary and speak to the depths of his musicianship. He is an inspiration to so many in the worldwide music community. Bob would be deeply touched.”

Greg Phillinganes is one of the world’s most sought after keyboardists. His 40-year career began in 1975, at the age of 19, when Stevie Wonder asked him to be part of his band, Wonderlove. In 1979, Phillinganes went on to record, perform, tour and/or write with a staggering array of GRAMMY Award-winning artists including: Quincy Jones, Eric Clapton, Burt Bacharach, Herbie Hancock, Babyface, David Gilmour, Bruno Mars, Santana, Earth, Wind and Fire and many others.

Phillinganes was also a member of the GRAMMY Award-winning supergroup Toto from 2003 to 2008, and is featured on their album and live DVD entitled “Falling In Between.”

He is a sought-after musical director and has led the band and talent for an amazing array of events including Stevie Wonder’s “Songs In The Key Of Life” tour (2014-2015), The Jackson’s 30th anniversary special, numerous Grammy Tribute shows, events at the White House, Cirque Du Soleil’s Michael Jackson Immortal tour, and multiple Gershwin Prize/Library Of Congress award events.

“Bob Moog’s contribution to modern music is undeniable and I am so honored to have had the opportunity to thank him in person,” remarked Phillinganes. “I’m also greatly pleased with the work and direction that Michelle Moog-Koussa is doing in moving her father’s legacy forward with the Bob Moog Foundation, of which I am a proud contributor.”

“Synthesizers have been in my musical lexicon since the first time I experienced Stevie Wonder’s ‘Music Of My Mind’ album in 1972,” he adds. “One of the standout keyboards from that record was of course, the Minimoog, and from then to this very moment, I can’t imagine music without that unforgettable sound.”

Moogmentum in Place is an upcoming series of fundraising live stream events, from May 9th- May 31st, celebrating Bob Moog’s 86th birthday and the one year anniversary of the Moogseum.

Moogmentum In Place will feature performances, musical and technical insights, and question and answer sessions with a prodigious and varied group of legendary musicians, composers, and music technologists. All events will be streamed from the Foundation’s Facebook page, where attendees from around the world will have the opportunity to donate in any amount.

Moogmentum In Place will feature film composers and synthesists Alex Wurman (May 9th) and Michael Whalen (May 17th), renowned keyboardist and musical director Greg Phillinganes (May 15th), former Earth, Wind & Fire keyboardist Larry Dunn interviewed by Jerry Kovarsky (May 21st), theremin virtuoso and music technologist Randy George (May 23rd), and electro-acoustic violist/composer Martha Mooke (May 28th). A virtual tour of the Moogseum and other events are also planned. Further information about each event will be released the week prior to it occurring.