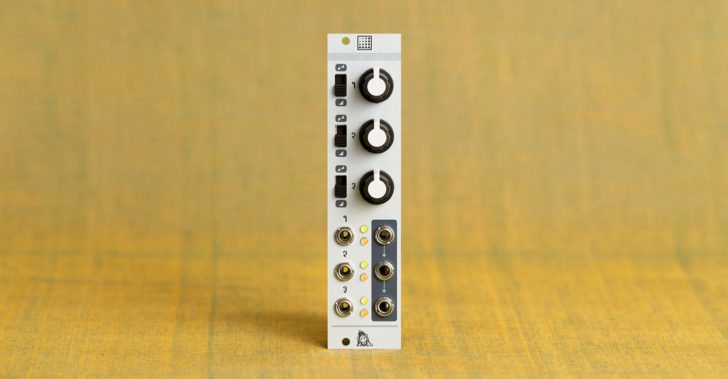 Mutable Instruments today announced that it has released updated versions of two of its modules, Ripples and Shades.

Both modules were originally introduced in 2012. The 2020 updates match the design language used in recent Mutable Instruments modules like Marbles, Plaits and Rings. And developer Émilie Gillet notes, “There are more changes than a new panel!“

Shades, above, provides 3 channels of audio/CV processing, which can be configured either as active attenuators or as attenuverters.

Unconnected inputs are normalized to an internal precision voltage reference, which can produce either a +5V or +10V constant voltage.

Shades’ outputs are daisy-chained, allowing adjacent groups of 2 or 3 channels to be mixed together. 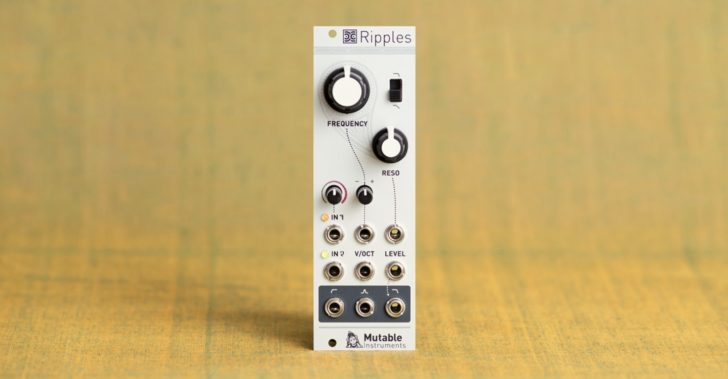 Ripples is a four-pole filter in a small 8-HP package.

The updated Ripples has two input paths: one with a drive control, allowing the signal to be distorted (or providing enough gain for the processing of line-level signals), and the other transparent, preserving the clean-sounding character of the original version of the module.

Three filter modes are available: high-pass, band-pass, and low-pass. The slope (2 or 4 poles) of the band-pass and low-pass outputs is switchable.

Self-oscillation is available for all modes and produces a clean sine-wave on the low-pass output. Unlike many classic 4-pole designs, this filter does not suffer from “loudness drop” when resonance is increased. The resonance loudness compensation circuit brings a slight tone coloration reminiscent of Japanese classics from the 80s, with a very round and liquid resonance.

The low-pass output goes through an internal VCA. This makes Ripples a good final stage module for an inexpensive, or space-constrained, subtractive synthesis synth voice.

Gillet says that the updated versions are already on their way to distributors.