The Behringer introduction, earlier this week, of the Swing MIDI controller – a knockoff of the popular Arturia Keystep – struck many readers as sad and even pathetic.

Or, as Glen Darcey, VP of Product Management at Arturia during the development of the original Keystep, says, “To take a product that has been on the market for 5 years and not do anything new, learning from customer complaints or looking at alternate use cases, is just absurd.”

Chicago-based designer Clayton Miller viewed Behringer’s Keystep knockoff as a lost opportunity. He decided to use the Swing controversy as an opportunity to explore some of the other possibilities that Behringer’s approach ignored.

“Everyone’s roasting Behringer right now, and for good reason,” he says. “I tried to take a positive approach and explore what they could have done to actually innovate!” 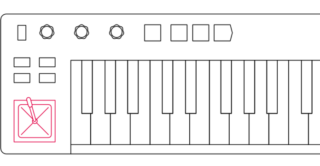 On his site interuserface.net, Miller shares Ten Ways Behringer Could Have Improved on the KeyStep.

The article includes 10 design sketches that show some of the possibilities of creating iterations on the Keystep design, rather than simply copying. They include options like adding a row of buttons for step sequencing, shown above, or incorporating a joystick instead of touchstrip controls, right.

“It is a genuine head-scratcher – how a company that clearly has the capability for original product development, given critical successes such as its Neutron semi-modular synthesizer or its Wing mixing console, could veer to such an unimaginative extreme,” adds Miller. “How hard would it have been to think of something – anything – to differentiate the hardware? Could they really not come up with a single idea?”

Check it out and let us know what you think. Would any of these designs make you more interested in buying a Behringer alternative to the Keystep?