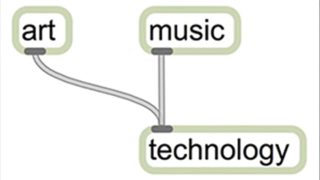 After 9 years and 380 interviews – with musicians, artists, synth designers and developers – the Art + Music + Technology podcast is ending.

Host Darwin Grosse let us know he is discontinuing producing the podcast, because his health no longer allows him to continue.

The Art + Music + Technology podcast has a simple format – just two people talking. But the podcast has become a favorite of many synthesists, because Darwin listens intently to his interviewees and asks them intelligent questions, informed by his deep knowledge of art, music & technology.

In addition to being a composer & synthesist, he’s a leader at Cycling ’74 (developers of Max) and a hardware developer (Ardcore). This background means that he’s equally at home interviewing synth pioneers like Morton Subotnick, tech gurus like Native Instrument co-founder Stephan Schmitt and keyboard gods like Herbie Hancock.

Here’s what Darwin has to say about Art + Music + Technology and why he’d ending it:

“For the last 9 years of my life, I have been involved in a long-form project that has redefined my life: The Art + Music + Technology podcast. It moved me away from the slap-dash network discussions about the differences between Roland models and toward discussions about how musicians became the artists they are, who their influences were, and how hard they work to achieve the results that they get.

I decided not to limit the breadth of interviewees, sometimes choosing to talk to (mostly, but not always) musical artists, but to also sprinkle in a strong dose of academics (and their exploration into sound and MIDI), instrument builders (learning about the translation of ideas into physical constructs) and even ‘agitators’ – the people that spurred the industry forward with standards expansions like the original MIDI and recently-added MPE specs.

Through all of this, I tried to be more of a listener than a questioner; because I thought I’d get more out of the discussion that way. And it worked! By giving people free space to talk at a technical level they were comfortable with, the interviews ended up with a real conversational tone that became ‘The Sound of AMT.’

While I wish this could continue, I’m afraid it no longer can. Two years ago, I was diagnosed with kidney cancer, and began treatments and procedures that have left me greatly fatigued. Initially, I was able to move forward because of exceptional tools provided by Libsyn, Rev.Com, Patreon and others. I had to trim back production by about half, but that didn’t seem to bother the listeners.

But early last week, it became clear to me that my health complications will prevent me from dedicating the time and concentration to AMT that I strive to achieve. As a result, I will be discontinuing the podcast production permanently.

Interviews, transcriptions, and related files will remain where they are, and Libsyn will continue to maintain the audio files for me . I’ve sincerely enjoyed interacting with the many interviewees and the listeners.”

The Art + Music + Technology podcast has been an epic project, offering listeners an unprecedented opportunity to hear musicians, artists and technologists share personal insight into their work.

Here are a few examples to give you a taste of what the podcast has to offer:

You can listen to hundreds of interviews at the A+M+T site. And if you’ve enjoyed the show, or just want to say ‘Hi’, Darwin says that he’d love to hear from you.