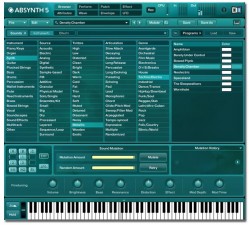 Yesterday, we reported on a statement from developer Brian Clevinger on the the fact that Native Instruments had quietly removed Absynth – the ground-breaking semi-modular software synthesizer – from its lineup.

Here’s what the company has to say about their decision to retire Absynth:

“Native Instruments has made the decision to not include Absynth in Komplete 14, and to additionally stop selling it as an individual product. We know that this will be disappointing news for many of you who have been long-time users of the software synthesizer during its 22 years on the market.

We always aspire to provide the best user experience with each product that we offer in our catalogue. Unfortunately, we must acknowledge that this is sometimes not possible due to constantly evolving user needs and technological standards. Discontinuing Absynth was not an easy decision to make, but the resource required to keep the product in line with modern standards has become too much of a challenge. Absynth has also long been in need of updates and improvements, and we are unfortunately not able to provide the synth with the attention it needs.

Due to this, we have stopped all sales and development activities effective immediately. Users who already have a license will not be affected, as Absynth will continue to operate normally. All users with a license will still be able to download and use it on current versions of Windows 10/11 or on Intel Macs up to macOS 12.

We want to deeply thank Brian Clevinger for being such a great collaborator and inspiring creators over the years, and thank all of you for loving Absynth as much as we have.”

Kudos to Native Instruments for sharing the drivers behind their decision.

Absynth’s retirement highlights one of the limitations of software synths – they’ll eventually be rendered obsolete by technological change. Anyone heavily invested in a particular synth could be stuck maintaining a legacy computer system, if they want to continue using the synth. Absynth had a fantastic 22-year run, but its retirement will also affect a lot of people, as the current version is rendered obsolete by the evolution of computer platforms.

This ephemeral nature of software synths has been especially noticeable in the world of iOS synths. The introduction of the iPad led to an explosion of creative development work on synths and sound tools. But many of these have quickly been rendered obsolete by the rapid evolution of iPad OS.

Absynth users should note that you can still download and install the application, it just will not be updated in the future. See the Support section of the NI site.