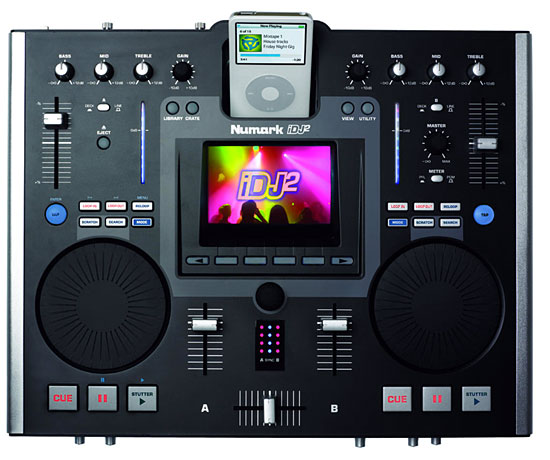 The Numark iDJ2 is the only iPod mixing console that provides music control with real-time scratching, pitch control, seamless loop, and full cueing. The iDJ2 features an new iPod docking system that lets you play two songs simultaneously from a single iPod, without the need for a computer. You can hook up multiple mass storage devices including additional iPods, thumb drives, and external USB hard drives through rear panel USB ports. In addition to USB connectivity with iPod docking and charging, the iDJ2 comes with line inputs for any audio source including a microphone, CD players and turntables, making it one of the most flexible DJ products ever produced.

You can manage your music library with visual track-profiling using the iDJ2’s graphic interface. The iDJ2 also lets you record musical performances to the iPod or any connected drive, in addition to offering full control audio play back.

While the first generation of iPod mixers were glorified toys, the iDJ2 looks like its moving the category into new territory.

iDJ2 also comes with Numark’s exclusive Crate feature. The Crate is a unique feature that allows you to hold music you expect to play in a waiting list on the top performance level. Music can be placed into the Crate at anytime from search results, browse results, or playlists. Music in the crate can then be managed by sending it to decks or reordering on the fly. All of this has been designed to work seamlessly while playing songs.

The Crate gets it’s name from the traditional function of a vinyl DJ’s record crate where DJs would often prop their records prior to placing on their decks. With Numark’s Crate feature, you can line up an entire Playlist, with the flexibility to swap songs or change their play order in seconds, without missing a beat. iDJ2 supports loading multiple file formats into the Crate including MP3, WAV, and AAC (non-DRM).

A special iPod Direct Mode function allows users to play all iPod-supported music including songs purchased from the iTunes music store. Numark’s iDJ2 is available now with a suggested list price of $799 and an approximate street price of $599.