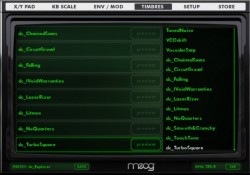 Moog Music has officially announced the Grateful Dead Expansion Pack for Animoog, a new sound library that is based on the Grateful Dead’s live performance at the Carousel Ballroom on Feb. 14, 1968.

The pack features 82 Presets and 45 Timbres that were carefully extracted from the live recording, and then optimized for the Animoog’s Anisotropic Synthesis Engine.

The Grateful Dead Expansion Pack is broken into three categories: ensemble, percussion and vocal sounds. In each case the timbres were extracted from individual vocal performances, percussion hits or instrument riffs performed during the Grateful Dead’s concert at the Carousel Ballroom 44 years ago. The pack allows musicians today to cre-ate dynamic soundscapes from the Dead’s rare and complex source harmonic content originally performed decades ago.

Here’s The Dead’s Mickey Hart checking it out:

Here are audio previews of the pack: