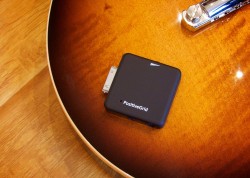 Positive Grid, the creator of BIAS and JamUp Pro XT, today introduced its JamUp Plug HD, a studio-quality guitar and bass interface for use with recording and performance apps on the iPad, iPhone and iPod Touch.

The JamUp Plug HD also features an input level control and three-color LED for quick visual monitoring. A green LED = the JamUp Plug HD is connected, ready and working with the software; orange = the signal level has been optimized for the instrument; red = the input level is too high.

Positive Grid’s new interface allows musicians to “crank it up” and be ready to rock on literally any current iOS device. The JamUp Plug HD docs directly with the iPhone 4 and 4s, iPod Touch 4, and iPad 2 or 3 via its 30-pin connector, and also supports newer iOS devices via Apple’s 30-pin-to-Lightning adapter.

Pricing and Availability. The Positive Grid JamUp Plug HD audio interface retails for $79.99 and is available now from the PositiveGrid website. For additional product information, consult the PositiveGrid site.