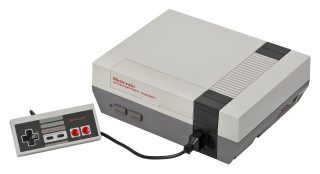 In this post, guest author Joe E. Allen interviews composer Alex Mauer. Mauer is well-known within chiptune, with popular releases such as Blast 1 and 2, 9999 and Vegavox – the first album ever released on a NES cartridge.

Recently, Alex been able to turn her passion for chiptune and synth music into a living, soundtracking the 2013 movie, Motivational Growth, using the Commodore 64 and NES. Alex is also currently heading up the soundtrack for Starr Mazer, a Kickstarter-funded indie game.

Joe E. Allen: Why do you enjoy chiptune so much – is it the nostalgia aspect?

I don’t really think of myself strictly as a chip musician, but electronic in general.

I do like the nostalgia aspect, but that’s just a component of it. The limitations make musical choices more critical. Melodies have to be stronger, you have to suggest chords using arpeggios, you have to strip out stuff that doesn’t matter.

Joe E. Allen: Listening to your Blast releases (embedded above), where you went back to recordings from your childhood and embellished them into fully-fledged songs, it’s clear that you’ve been into synths from an early age.

I grew up with a Yamaha DX-21 FM synth in the house, which I used to record the early version of Blast in 1991.

Joe E. Allen: What have been your tools/synths of choice up until this point?

Alex Mauer: Early on, my main synthesizer was the Yamaha DX-21, which sounds like 80s arcade games. It uses the same Yamaha OPM FM chip, as many popular games from that time. I made a bunch of recordings, including the original Blast from 1991 with it.

Once I got a computer, I switched to almost exclusively using Impulse Tracker, loaded with samples ripped from Amiga MODs and some samples I would make with my growing synth collection.

In 2005, I had a breakthrough when I switched to Nerdtracker, and soon after Famitracker, to produce chiptunes which could play back on the real Nintendo.

By this time, I had sold all of my hardware synthesizers because of the promise of soft synths, which were supposed to be far superior. I was using Buzz Tracker during this period to produce some well-composed, but terribly-produced synth music. It became clear that losing all of my hardware was a terrible move and I shifted my focus to chiptunes.

My best tool has always simply been a computer with trackers. That’s the center of everything I do.

Joe E. Allen: You’ve made too many chiptune releases to mention them all, but what are some of your favorites?

Alex Mauer: Vegavox 2 stands out as one of the best.

It was released on hand-assembled NES cartridges, has a bunch of moody visual art, and the music is very strong.

Runner up is probably 9999, where I used 9 different game consoles to do 42 different songs, which fill a CD to maximum capacity.

But my favorite stuff I’ve done is currently in the works – all the material for Starr Mazer; so far it’s been some of the most emotional stuff I’ve ever written.

Joe E. Allen: Tell me about your involvement with the Starr Mazer project.

Alex Mauer: I am the Music Director and Lead Composer for Starr Mazer. We have around 30 guest musicians contributing tracks to the OST.

I’m writing the core songs and establishing the style, then directing the guests to match the style.

You can check out the progress on Starr Mazer on our Twitch stream Starr Mazer TV. I host a show called Starr Jamz once every 4 weeks, showing the music progress.

Joe E. Allen: How did you make the transition from chiptune as a hobby to getting paid to write for films and games?

Alex Mauer: I never considered music a hobby… I always had the intention of becoming a professional, however unrealistic that seemed. The first soundtrack I did was back in high school in 1999. I did a soundtrack for this RPG that ended up being vaporware.

The transition to working for a bigger company was a result of getting lucky with my release, Vegavox. It had a lot of magazine coverage and someone from EA Mobile bought a copy.

He then asked me if I could write General MIDI for games and I said “YES” even though it wasn’t true! I taught myself and worked for EA Mobile for a few years, until the iPhone killed General MIDI.

Joe E. Allen: Much like Disasterpeace did with It Follows, you chose to use a vintage video game sound on the soundtrack you created for the 2013 film,  Motivational Growth. How come?

Alex Mauer: The director, Don Thacker, had the goal of doing the first ever feature film that used chip music for the entire soundtrack.

We chose the Commodore 64 for its deep sound design possibilities and analog filter. We also went with the Nintendo NES for its iconic sound and ability to play back samples.

Alex Mauer: Yes, they are linked. If you’ve seen the film, Motivational Growth contains a trailer within the film for Starr Mazer. The two projects have been linked since their inception.

In the film, the main character Ian travels inside his TV and also into the world of Starr Mazer.

Joe E. Allen: Where do you see yourself headed next?

Alex Mauer: I think I’ll be doing a lot more game soundtracks, especially since I co-founded the game company Imagos Softworks for the production of Starr Mazer.

I’m also the in-house composer for Imagos Films, doing a lot of work on commercials for Adult Swim Games. I’ve been working with Brave Wave on that secret project as well. I really want to start working on Vegavox 3, when I have some free time.

Note: This post was updated at Mauer’s request to remove images of Mauer and his work. (April 28, 2017).

Allen previously authored How To Make 8-Bit Music: An Introduction To FamiTracker.

6 thoughts on “An Interview With Chiptune Composer Alex Mauer”