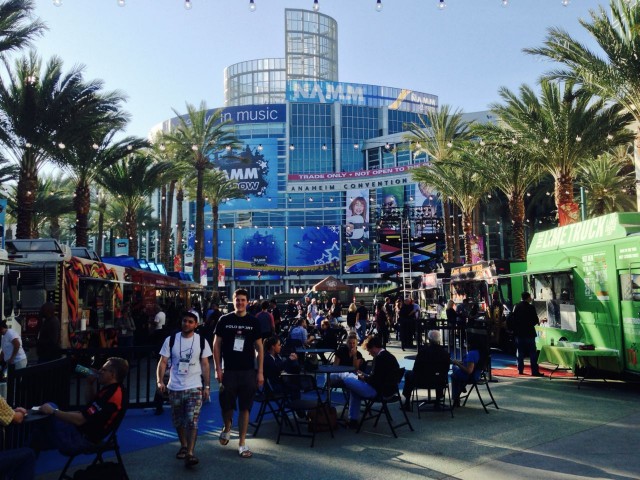 The 2014 NAMM Show was another great year for the event – the weather was fantastic, there were tons of new synths and interesting gear introduced and we got to see a lot of people passionate about synths and electronic music.

Here’s our pick of the best new gear that was either introduced at the show this year or that made its NAMM debut this year: 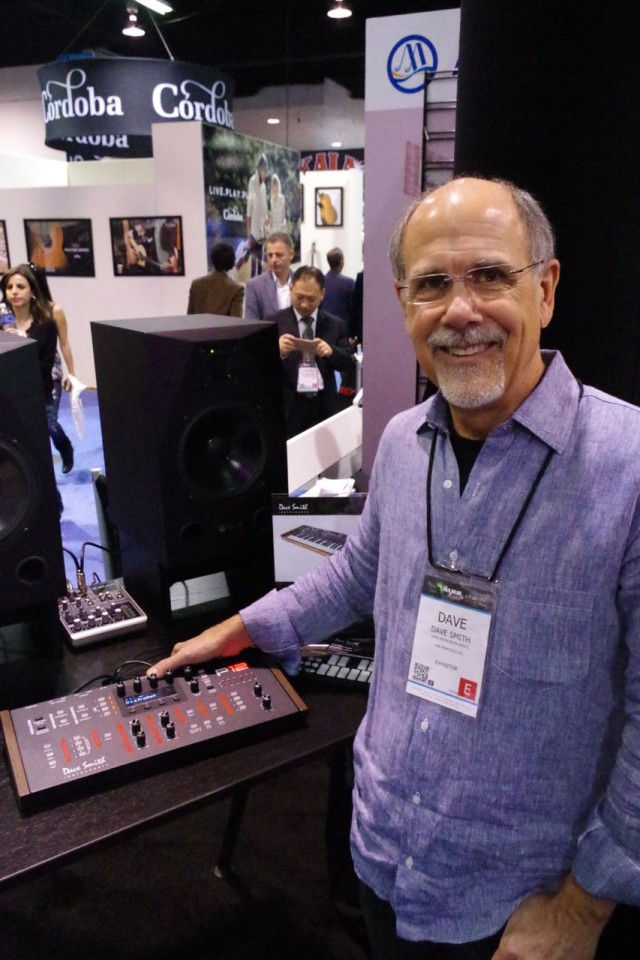 Dave Smith’s new synthesizer, the Prophet 12 Desktop, sounds great and is surprisingly immediate, proving that usability isn’t just a function of how many knobs a synth has.

And the Prophet 12 Desktop is exactly what a lot of readers asked for when he introduced the Prophet 12 last year – a version for people that already have a great control keyboard. 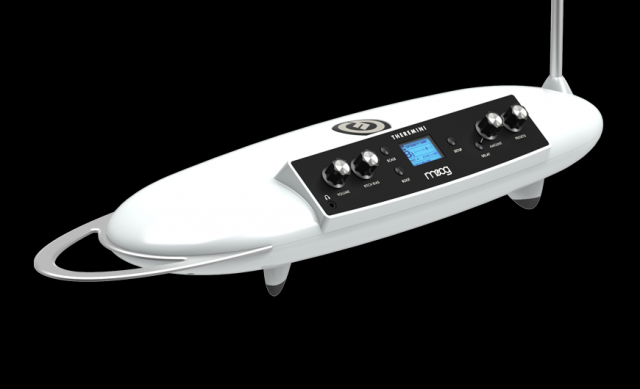 Moog’s new Sub 37 is going to be an amazing synth – but the Moog Theremini impressed us even more.

The Moog Theremini is the biggest rethinking of the theremin in the instrument’s history. It’s daring aesthetically, disposing with the traditional dark wood and metal of most of Moog’s instruments and instead looking like something out of Barbarella. It’s daring creatively, turning the theremin into a basic synthesizer, with a wavetable oscillator design inspired by Animoog. And it’s daringly playable, offering to at last turn the theremin into an instrument that skilled players can play both consistently in tune and expressively. 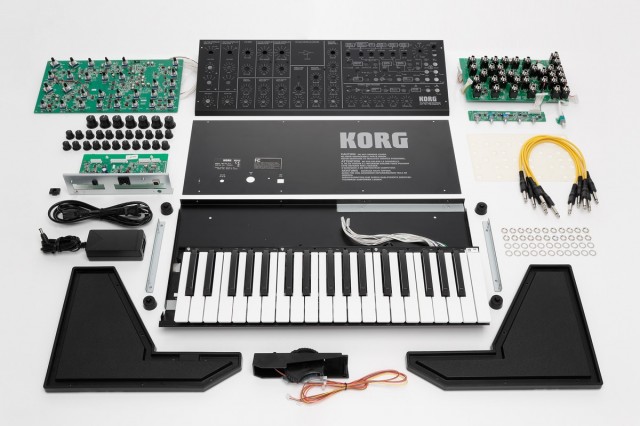 Korg made a surprising introduction at the Winter NAMM Show – a full size version of the classic Korg MS-20, in kit form.

The MS-20 Kit, above, is a true analog, 1:1 scale reissue of the MS-20, with both filters built in (the more aggressive early production filter and more mellow late production one).

Development of the MS-20 Kit was led by the original engineers themselves, who, according to Korg, spared no effort to perfectly replicate the circuitry of the original unit. When it was necessary to substitute a part, the engineers made the decision which part to use, based on their own ears, ensuring that the sound of the original unit has been reproduced. 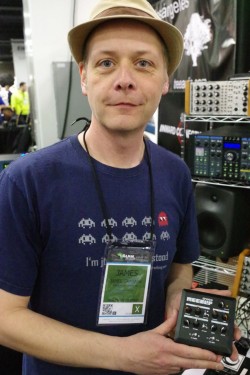 The Meeblip Anode, shown at right with developer James Grahame, is a tiny hybrid synth that has a lot going for it:

As with the original MeeBlip, the anode is open source, and users are encouraged to learn from, and experiment with, its code and circuits. The anode comes fully pre-assembled, though, and is ready for use straight out the box.

And it costs $125 – which is pretty amazing for a MIDI bass synthesizer.

Eight analog drum voices take advantage of several dedicated analog circuit designs, each of them designed for generating specific types of analog drum sounds. For even more percussive flexibility, each voice can also be augmented up with user samples.

Don’t you wish all your gear was ‘beer-proof’? 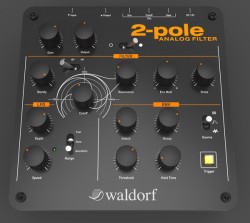 Waldorf introduced the 2-Pole filter, a new hardware analog filter that’s designed to give users ‘the heart of the Waldorf sound’ in an easy to use, one-knob per function design.

It’s not just a powerful analog filter, though, it’s one of the most flexible and capable filters that we’ve ever seen. It’s got a built-in preamp, which doubles its flexibility. It can be modulated by its LFO, envelope follower or an external signal. It’s got post-filter overdrive and, what may be a first for electronic music gear, a gemütlich setting.

Most importantly, though, the 2-Pole sounds great.

Behringer has long been known for making inexpensive versions of established gear designs. For several years, though, it’s been putting more emphasis on developing its own innovative designs.

A great example of this is the Behringer Motör MIDI controllers, which offers all the controls we’ve grown to expect from MIDI control keyboards – plus motorized faders and DAW support.

Another new MIDI controller that impressed show-goers with its combination of features and affordable pricing is the Arturia BeatStep. The Beatstep is a versatile pad and knob MIDI controller. 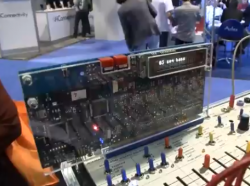 Something we never expected to see was a new Wifi card for the 40-year old Music Easel – but that’s what Buchla introduced with the iProgram.

The iProgram is a new expansion card for the Music Easel that brings patch memory and WiFi connectivity – and even iPad control – to the vintage analog modular synth design. 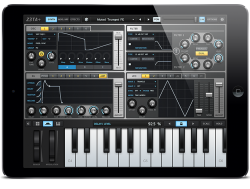 Cakewalk surprised a few people by introducing an iPad version of their flagship software synthesizer Z3TA+ 2.

Existing Z3TA+ 2 users know how powerful the synth app is. The iPad version promises to open up new options and workflows for existing users – and to introduce the Z3TA+ design to a lot of new users. 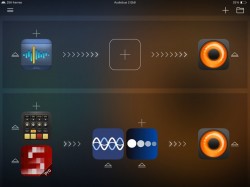 The coolest news for mobile music makers, though, was probably AudioBus 2, which was informally introduced at the show.

AudioBus 2 will be capable of running as many apps in parallel or in series as your device can handle – multiple, independent pipelines with as many inputs, filters or outputs as you like in each.

iZotope Break Tweaker – designed by BT (the producer behind Stutter Edit) in collaboration with iZotope in-house designer-musicians, Break Tweaker is a described as ‘futuristic drum sculpting and beat sequencing machine.’ 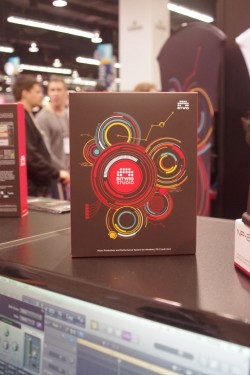 Bitwig Studio – after alternately exciting and frustrating electronic musicians over the last year, Bitwig came to NAMM to show the release version of their new DAW and to announce the ship date –  March 26th, 2014.

They also highlighted many of the features that originally excited people about Bitwig, including: 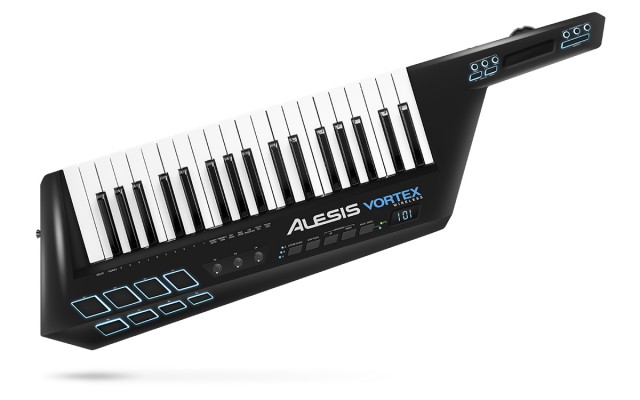 Alesis introduced the Vortex Wireless, a $199 wired/wireless keytar controller. Plug the included USB receiver dongle into any Mac or PC to establish a live USB/MIDI link with the Vortex controller and you’re ready for keytar action. 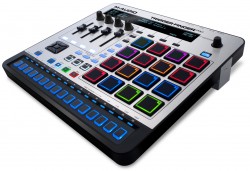 M-Audio Trigger Finger Pro – the original Trigger Finger was pretty cool, but the new Pro version takes the concept to a new level. It’s a 4×4 pad controller, but it’s also got a built-in step sequencer and hardware MIDI out.

And then there are the Trigger Finger Pro’s 48 assignable controls and the integrated software package. 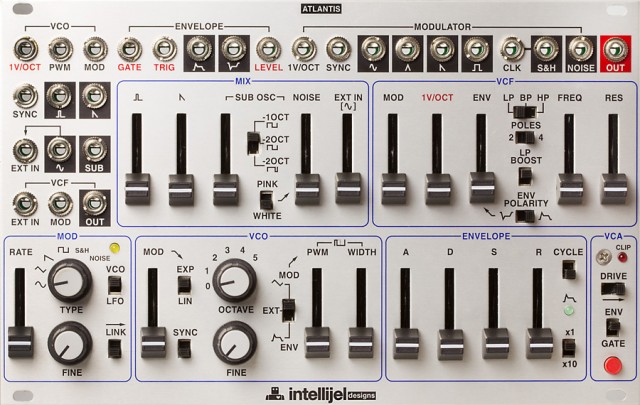 When it comes to Eurorack synthesizer modules, there was an amazing amount of new gear introduced. There was so much new Euro gear that it’s almost impossible to pick a ‘best of’ out of the bunch.

So, we’ll cheat and share two of our favorites. The new Intellijel Atlantis, above, is a complete, fully patchable subtractive synth voice in Euro format. For situations where you want a straightforward synth voice, patch in a CV & gate and you’re ready to go. But it’s also fully modular, so you can patch more experimental sounds or patch the Atlantis core elements into other modules.

We were equally impressed by the Pittsburgh Modular System 10 – one of three all-in-one Eurorack modular synths that they introduced at the show. It’s an all-in-one synth that works like a standard monosynth, but also is a starter Eurorack system. 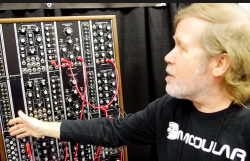 For large format synth fans, Gert Jalass of Moon Modular showed that there’s lots of room for innovation in the 5U format.

He showcased an insanely powerful system that featured a combination of his existing modules and new modules, like his M524 Quad Low Frequency Oscillator. The Moon Modular system offers the proven usability and sound of a big Moog modular system, but also includes features that would have been impossible or impractical in the early days of modular synths. 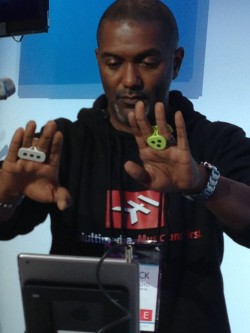 IK Multimedia’s iRing – iRing is a $25 device that works with your iOS device to work as a motion-tracking controller for music.

The iRing controller utilizes wearable rings with identifiable markers, along with your mobile device’s front-facing camera, to determine the precise positioning of the ring markers, tracking their movements and position in the 3-dimensional space in front of the device. And that’s pretty cool.

But what really makes iRing interesting, though, is not that it’s a new option for 3D motion control for musicians – it’s that:

We’re looking forward to seeing what music hackers do with this. 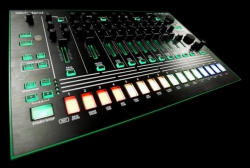 The Roland Aira line of electronic music gear managed to generate the biggest buzz of the Winter NAMM Show, despite the fact that no details were officially released.

At Roland’s official press event, they introduced the new Aira brand as a sort of start up within the company.

We expect the Aira line to have a lot of people talking when it gets its official introduction, later this year.

Novation and Arturia also were both showing analog synths, the Bass Station 2 and the Microbrute. The two analogs weren’t new announcements, but deserve mention as notable new synths that made their NAMM debut this year.

Also, because there were too many interesting new synths to include in this already-long article, you might want to also check out our story about new analog synths at The 2014 NAMM Show.

What did you think of the gear introduced at this year’s NAMM Show? Let us know what you think of our Best of NAMM picks – and what you were most impressed by!